To Turn the Tide 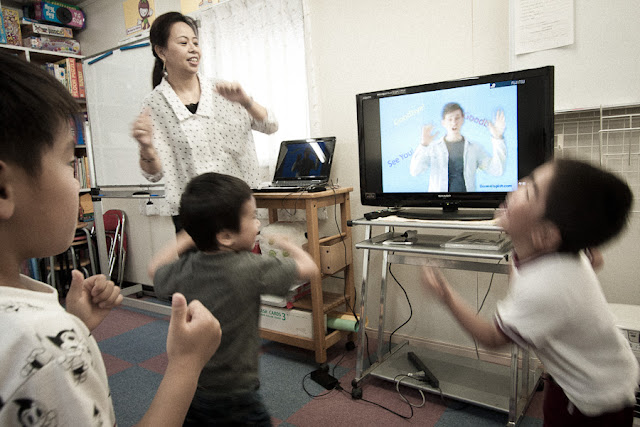 Lou Kato laughed as she danced with the three Japanese boys of her Basic English Communication pre-school class. "I am happy! I am happy,” said one child. No signs of exhaustion on Lou’s face. Pulsating energy and her joyous laughter filled the room as they danced and ran around.

Twenty-five years ago, Lou came to Japan with the La Salle cultural dance troupe as part of a two-month multi-cultural presentation in Kanazawa City, Ishikawa Ken. "When we came to Japan we were treated like celebrities. They received us politely and even gave us garlands at the airport", she recalled.

This was just a few years before the influx of Filipino entertainers began. At the time, musicians and performers were mostly seen at first class hotels. In the 1990s, the number of Filipino entertainers surged from around 9,000 in 1986 to approximately 60,000 in 1991. Their work somehow evolved from plain stage performances to pouring drinks to their customers to suspicion of prostitution. Bad reports involving entertainers as well as human trafficking issues gave Filipinas in Japan questionable reputation.

Lou danced with her group for three years until she married Ken Kato, her promoter, and settled as a housewife in Hamamatsu City, Shizuoka Ken. “My in-laws were shocked at first because they did not know how to interact with me,” she recalled. The next year, she gave birth to a daughter, Yuko.

When Yuko was three years old, Lou enrolled her in one of the biggest English schools in Hamamatsu. She wanted to make sure that Yuko would speak fluent English so she could communicate with her family in the Philippines. When Lou went to observe a class, she was dumbfounded. "The teacher spoke fluent English to me but when she spoke to the class she blurted out...Harrooo (Hello)in Japanese,” she said.

Lou took that as a challenge. She decided to start her own school. She searched for English teachers training courses and attended several Oxford University Press seminars in Tokyo. She got her license in teaching methods at the IIEEC-OUP Teacher Training Center and with LATEM. That is how Basic English Conversation (BEC) Kyoushitsu was born.

At first there were only three students. Now there are several classes for different grade levels and adults. “Two, of my first batch of students, are now studying at Waseda University. And they never fail to visit me whenever they are in Hamamatsu,” she said with a smile.

"The school's goal is simple. We aid the parents of elementary pupils to achieve goals for their children. Such as to pass the Eiken (Practical English Proficiency Test) or to have them enrolled at public schools. That is where we do our best," she added.

Now she also works as an ALT (Assistant Language Teacher) to different primary schools. Teaching in primary schools is a totally different experience for her. Some students complain. Some say English is “difficult.” Some say,” learning English is of no use.”

It is not only the students that give her a hard time. One time, an indifferent, old Japanese teacher, interrupted her in the middle of a teaching session and shouted, "Stop!" Shocked, Lou immediately stopped as the teacher tactlessly took over. She was crying inside the car as she headed back home.

At her own school, the children open up to her.  "God has a purpose for me. It is not just English that they need. They need love and time", she believes, "Always listen to them". Once in a while, she would serve as a mediator between parent and high school students who have deep personal problems. Sometimes, some of these problems go as deep as committing suicide. "In situations like these my role shifts. I become their second parent," she says. "I would then encourage them to pray." This is where she draws her happiness.

Lou is also an interpreter at the Hamamatsu government lawyers' office. She also serves as one of the Filipino representatives of HICE (Hamamatsu Foundation for International Communications and Exchanges). During multi-cultural events she gives speeches about the Philippines and its culture. And for seven years now, she coordinates with LATEM (Little America Teaching English Method) and lectures on how to teach English in Japan.

It has been a tough journey. Oftentimes, she meets Japanese who are still prejudiced against her Filipino heritage and past career as an entertainer. Her response is simple, “Persevere, understand the culture and be patient.” She then excused herself as her new student, an old Japanese teacher whom she used to work with arrived.
Labels: DPJ181 feature story Lou Kato