As a young boy back in Cebu I was fascinated with the beauty of geishas, steadfastness of the samurais and stealth of ninjas that I see on movies and television. Me and my childhood friends wielding our katana made of bamboo would run towards the nearby river. Some of them would bring black T-shirts and wear them as a face mask and our lady friends would powder their faces. We then spend hours and hours playing the classic travelling princess ambushed by ninjas protected by her loyal samurais. Of course, I chose to play one of those immortal samurais.

And when we transferred to my father's hometown in Midsayap, there I met kindred spirits Homer & Alan. After classes we would hang out at Homer's place and watch either a Bruce Lee film or a Sho Kosugi film or even Tora,Tora,Tora or any war film. We never got tired of watching those films, so much was their passion for the martial arts that they would play and replay those Betamax tapes while practicing at each other wrapped in foam to cushion each faulty hit or fall during sparring sessions. I was lanky way back then and was much of a disadvantage compared to their athletic built. I get to be the referee, they get to spar.

15 years later that fire of fascination was rekindled by way of an Edward Zwick directed film, The Last Samurai where I first knew how a great actor Ken Watanabe is, and so much was the fascination that I would give my son the same name several years later. It also prompted me to read a lot about the Satsuma rebellion of which the plot of the film was based upon.

Then I met the love of my life, Rya. Not knowing that she was destined to take her masters course here. I, on the otherhand, was destined to be tried in the desert. For 2 years, even though separated by oceans, Rya was a ray of hope everytime she talks about her day to day experiences, from bicycle rides headed to the university to hour long train commutes on Sundays. Of people and places, timeless customs and traditions in the countryside to new generation fashion in the metros. But the best part of it all was when she sent me a book by Inazo Nitobe, Bushido: The Soul of Japan. A book that I read and reread for months, and even up to this very day, I get to go and read a few lines.

After my tour of duty in the Middle East. We were reunited. Rya, who was taking a Spring break had a friend brought along. Keiko Yamazaki. Who I consider, my first "Japanese experience". As much as I was keenly observing her ways. I was struck with what most people will experience in their first-time meeting a Japanese. The language barrier. So I was there, trying my best to simplify words as much as I can possibly say, but most of the time I had Rya to straighten things out for me. In the course of one of our conversations, she asked me, "Do you want to go and visit Rya in Japan". I said simply, "If it is my destiny to be in Japan, I will be in Japan". She smiled and followed with another question, "What do you want to do in Japan?" Honestly I answered, "I will take pictures of Mt. Fuji...in all four seasons". Finally she told me, "Raddo san, Nihon no tamashii ga motte irun desu ne." (translated as Rad, you have the spirit of Japan.)

Three months after that conversation, my plane arrived at the Chubu Centrair in Nagoya. I heard the good news from Rya that she was bearing Ken and I need to come immediately to Japan to take care of them both. I said to myself, "Japan is calling." 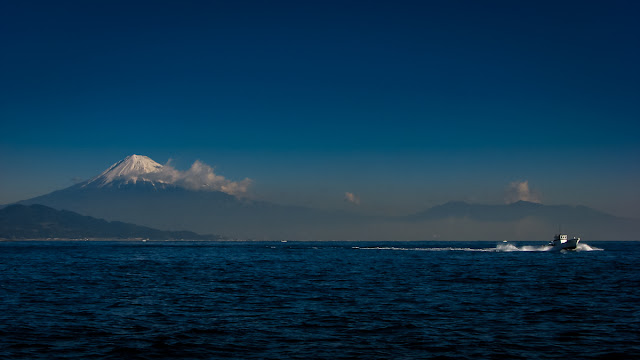