After months of planning and weekly night meetings the organizers finally launched the Bayanihan 2010 Photo Exhibit. It's not easy being one of the organizers. I was assigned to design the logo for the organization, exhibit poster, banner, others and setting up the venue. But for most of the pre-exhibit part choosing the "right" entries for the exhibit was the most critical. We decided that each contributor submits 5 entries and voted 2 (but ended up with 3) to be displayed. There were some art worthy entries but some were not in line with this year's theme. "The Beauty of Japan and the Philippines". Cultural and landscapes. But we have to consider. After all, this is a bayanihan. For sure we won't be having 32 contributors and 100 entries displayed, if we had been too strict in our choices. We might have ended (or encouraged further) some contributor's enthusiasm for the craft.
I, on the other hand, was also experiencing a different kind of difficulty. Choosing what entries to submit. The indecisive me submitted 10. Laugh out loud. Here they are.... (drum roll please). 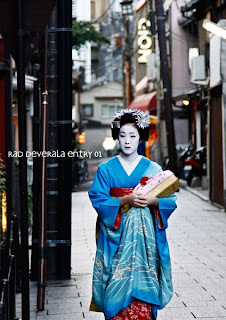 I love Kyoto. For most of it, I can't help but be transferred to a different time when I am in the Gion district. Lined with traditional architectures and during the late hours in the afternoon maikosan and geiko walks its streets. Although I was able to take several shots of different maikosan, I like this one the most. Her subtlety in the chaos. Her almost expressionless face. What is she looking at? 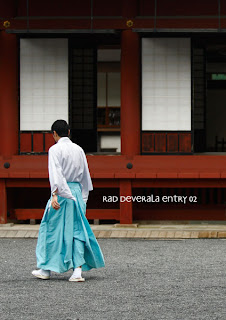 A day in the life of a Kennushi
Pardon my cliché. Yes. This is my attempt to do a Within the Frame cover shot. The multiple squares. The human element. Inhabitant-versus-habitation type of contrast. Thanks to David duChemin. 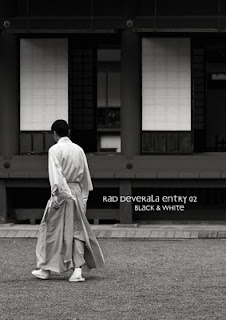 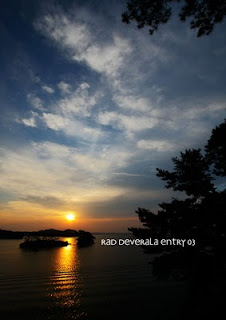 A Matsushima Sunrise
Known as one of Japan's 3 best scenic spots, Matsushima is an array of 260 tiny islands covered in pines. Personally, this is one of the most romantic place I have seen. I am crossing my fingers that in the not so distant future I would be able to bring Rya here. I digress. 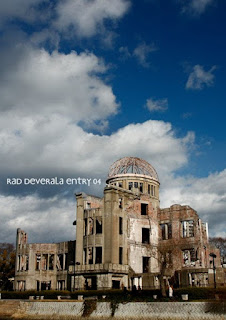 The A-Bomb Dome
August 6, 1945. A grim reminder of war and how mankind can annihilate itself. This could have been just a picture of the iconic building, if not for the lone old man passing under the willow tree. And if my calculations are right, he may have just been born or was just a small boy when they dropped the bomb. And if he is a local, his parents may have been killed during the blast. He may have made a promise to pass by the dome just to remember them. I have seen old men and women crying, praying in the early morning in this place. I feel their pain. 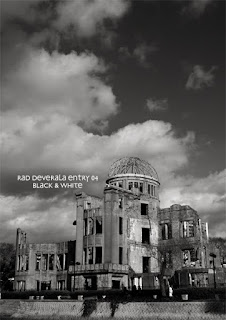 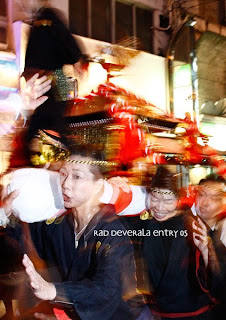 Another Mikoshi Night
This is a common sight in Japan during festivals. Devotees carrying their portable shrines, chanting in the streets during matsuri celebrating a good harvest. It is said that those who carries the mikoshi should sway it in all directions and push up and down to amuse the housed "kami".
Here I was trying a technique. Dragging the shutter. I'm not here to explain how the technique is done. I am still learning. I'd rather point you to the right direction. Matt Brandon has an in depth explanation of the technique and if you have a better dSLR you could try rear syncing too. 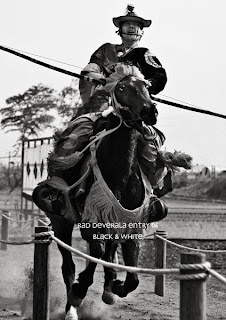 Yabusame
The annual Ume matsuri in Odawara features the best horseback archers of Japan. There is a certain calmness in the archer's face compared to the horrified horse. And if I was the beast I would be. He was heading to a throng of photographers and it was just a matter of seconds that the rider was able to steer clear off us. 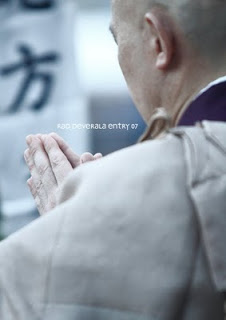 Nirvana
No not the band. And yes that highest state of spiritual attainment. As much as the title applies to Buddhism. This is my attempt at presenting symbolically what is common in all religions. The face of the monk is hidden. Its anonymity represents humanity as a whole. Faith also is universal, it comes from hearing the word of God (the ear) and praying (the hand) the act of faith in which we communicate with God. As much as we have different ways (the japanese character means direction) we all long for that complete & perfect peace. 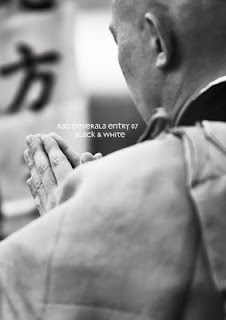 The B&W version.
My fellow organizers voted for entries 01, 03, 04 & 07 and I had it printed on Fujicolor's Digital Crystal print. The exhibit will end until 5:00PM on Sunday, this 15th of August.
Once again, I would like to personally thank my fellow organizers: chairman Fritzie Figuera, Wilma Kono, Beverly Komatsu, Adelina Tomino, Kenshin Iwamoto, Randy Yu, Jesslee Cuizon, Totomai Martinez and John Perez. I was an honour to have exchange ideas (though at times contradicting but that is what brainstorming is) and work with you. Special thanks to Kate Katayama & Sonny Arpon for helping during the set-up and manning the exhibit.
To the contributors: Danilo Aliben, Danny Dungo, Noli "Kid" Perez, Ronald Julian, Maika Kawashima, Gerlie Tumangan, Francis "Cacho" Menguito, Camilla Vanessa Uy, Jenny Nagashima, Rance del Rosario, Melissa Hashimoto, Sonny Arpon, Joseph Banal, Randolf David, Zip Gortayo, Maydette Panganiban, Josephine Yu, Rommel Custodio, Jane Romero, Bernadette Coronado, Joanna Lisarez Co, Mario Pinlac II, Lemuel Montejo, Maricel Deverala, Winston Sumalia, Randy Bueno, Hannah Galvez & Chris Castillo. Thank you for lifting this exhibit and bearing it on your shoulders. Hope to see more of your entries next year and keep shooting.
To the major sponsors: Mitsuoka, Cebu Web Services & other individuals who wished not be named. As you have given so will God bless you tenfolds for your benevolence.
To friends, families & visitors: Although it's the Obon holidays, you took the time to pass by the exhibit and refresh yourselves visually. Makoto ni arigatou gozaimashita.
Most of all to God who makes things happen. He is the author of light and giver of our sight. To Him be the glory.