Million of years ago, the human race have been moving out of Africa to Europe and Asia in search of food, change of season, political/religious freedom or adventure.The Bible speaks of how Moses led a diverse tribe of Hebrews out of slavery in Egypt into becoming a nation in Canaan. In the Philippine scene, mass migrations during pre-colonial time from the empire of Srivijaya settled in the island of Panay. Then came the explorers from Spain who opened opportunities to travel to the New World and back to Europe. And from then on, the Filipino have been dispersed to every corner of this planet. Name a country or ocean without a Filipino and I will tell you that we have set our feet in Greenland, Norway, Siberia, Tajikistan, Nepal, Iraq, Nigeria, Angola, Madagascar and South Africa.


I am no stranger to migration. I owe it much to my father's pioneering spirit and my country. He was a Master Mariner who got re-assigned from one island to another. We transferred to Cebu from Zamboanga when I was just barely 3 months old. And at the age of 10 I have already visited Manila, Marinduque, Romblon, Kalibo, Ilo-ilo, Dumaguete, Bohol, Maasin, Tacloban and Cagayan de Oro. During college days, I almost rounded up most of Mindanao living there. And when I  started out working in Luzon, I went far north living in La Union, Baguio and finally settling down in Ilocos Norte.


They say that moving is one of the most stressful things in life, which include,  marriage, marital breakups, losing one's job & death in the family. During my 10 years of working in the cut-throat asphalt jungle of Manila, I have lost jobs and relocated a few many times. But I never felt any stress. Must have been that most of my personal belongings fit into my mountaineering backpack and a box for the books. Talk about packing light in life.
Never felt that so called stress until this recent movement we had here in Fuji from Shizuoka. The last time we transferred (September 2006), the apartment was just a block away from Rya's single room to a couple's apato. Manny who was staying nearby was kind enough to help me push the trolley. What was cumbersome was setting up the refrigerator and washing machine. This time was totally different. We are talking from one city to another. It took us 12 hours loading, travelling and unloading the things from the van. Erwin offered to drive (Kelly, his wife gave birth to their first child Kathleen 3 hours after we finished. I am forever grateful to you brother!). Art was there to assist us load. Ginger, who also wanted to see our new home, gave Rya, Ken, Kaye and Mafe a ride. And off we go. The Fuji River did not part when we crossed it via the Route 1 by-pass. One thing for sure though was that God was there protecting us in all of the 3 times that we went back and forth.
It has been 20 days now. Some rainy and some still reminding us that it is still Summer. There are some boxes left that needs to be opened. No rush there. I need to know the new place and only during my afternoon freetime can I do that. So far these are the [ 5 ] things I find common in the area. [ 1 ] springs. There are 9 noted free flowing springs in the vicinity. All of which are free for the children to take a dip and have some fun. [ 2 ] schools. I have counted 3 elementary and 5 high schools. [ 3 ] shrines, temples & stone monuments of famous men. Also, a gravestone in honour of Yamamoto Kansuke is located near Ioji temple. One of Takeda Shingen's 24 generals and most notable on his battle strategy at Kawanakajima.  [ 4 ] smoke from paper factories. As an industrial center, Fuji city's landscape is dominated by these mills. The streets reminds me of Dammam, Saudi Arabia. And [ 5 ] solemn memorial parks. From our apato, one going left when we go down route 22 and the other going right towards one of the high schools.
Like an old pair of shoes, I can't help but miss the old apato in Shizuoka. And if I may list down again [ 5 ] of the things that I am beginning to miss it would be. [ 1 ] sunrise on the Suruga bay. I love mornings by the sea. There is some unexplainable attribute about it that just empowers me. Its solemnity uplifts my soul. [ 2 ] smoked salmon. Rya & I love smoked salmon. So, whenever one of us visits Shizuoka he/she gets to bring home the "bacon of the sea". [ 3 ] the supa (supermarket). Back there I could dash to Mochizuki, Mom's or Don Quixote till 12 midnight and be back in less than 10 minutes. Here, the nearest supa closes at 7PM. [ 4 ]  Students and the daigaku. I don't know and it may just be me. Whenever I am in the grounds of Shizudai I feel "young-er". Must be the "I-want-to-go-back-to-college" thing. Lastly, [ 5 ] the sound of semi (cicada) during Summer. As much as they are cracking my nuts, I can't stand the "lack of noise pollution" in this new neighbourhood. So unnatural. I don't see much people outside and when the clock strikes at 6 in the evening it becomes a "ghost" town. Good thing the house is filled with Ken & Kaye's cries and laughters and there are shouts from children playing during weekends.
Also near us is the famous Taketori park. The Japanese folktale of Princess Kaguya. It is said that almost all Japanese know or have read the Taketori Monogatari. Princess from the Moon, the movie version was  released in 1987. Living in the valley of Mt. Fuji will always have its pros and cons. And it may take us a while to be here. Perhaps, until Rya finishes her doctorate or 3 more years. Only God knows. Like the Pillar of Cloud, we could only hope and trust that everything is going to be just fine when He leads. And after all being near Fuji, I could see my "Mt. Fuji...in all four seasons" project may soon become a reality. 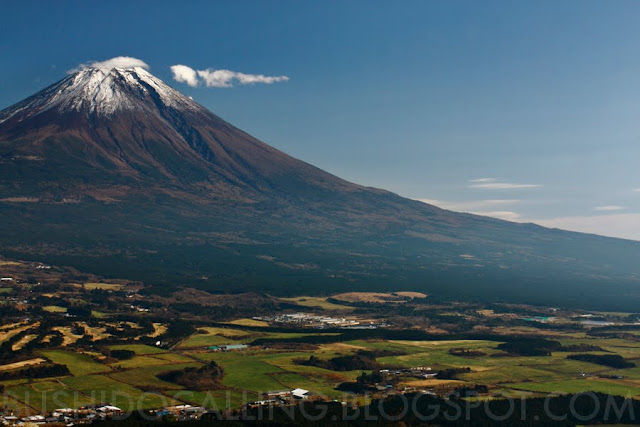