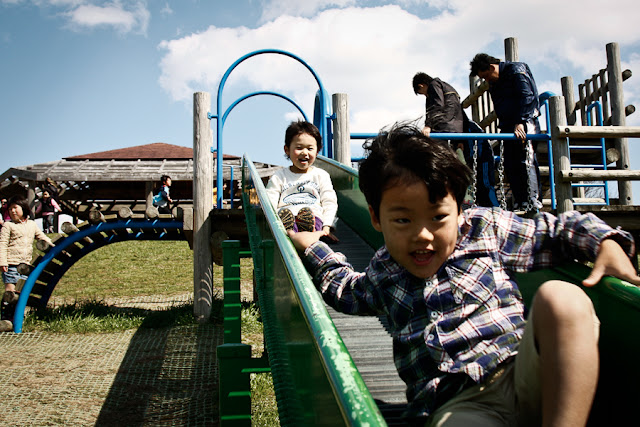 Last Sunday we got invited by our friends Asis & Shela who were celebrating their son Josh's birthday. We don't get to see them often but whenever we do we always have that inexplicable feeling that "we are not in Japan anymore". With them you are immersed in pure Filipino culture. The clan (everyone present were either related by consanguinity or affinity). The food (you got to taste it and be a believer!). The endless conversations (ahh... just sit, listen and laugh with us!). And the songs (I first meet them at a karaoke bar celebrating Shela's birthday).

This time we gathered at Miyuki Park. It is one of those beautiful parks here in Toyohashi that I have not been to. At first, the children put on bandanas and played Treasure Hunt. Ken was all giddy shouting at me and saying "Papa, I am a pirate!  We're going to find the treasure!" Rya and Kaye followed them all around as the children trekked their map and uncovered hidden clues and prizes.

The sun was way up in its full glory but the wind was more cruel as it blew unceasingly. All men were wearing sunglasses and putting up their jacket hoods. They already formed a small gathering beside the shrubs with their drinks to battle the chill. Varied topics were already being  discussed. As I sat and joined them, Winnie (Shela's uncle) introduced me to a few visitors. Then the conversation shifted to photography. Ian (one of the visitors) asked me what tip/s I could share to starting enthusiasts. Taken aback I laughed and replied with a question, "Why did you ask me?" "I was told you were a pro", was his answer. I was shaking my head and said "No, no,no. You got it all wrong. I'm not."  "And if I were I would still call myself a photographer. I don't do labels or titles." I explained further. With that I felt I needed to answer his question earlier seriously. Then I said "Just tell a story in every photograph you make."

All of a sudden the children were hovering around us. They have uncovered all hidden clues and were on to their last quest. It was the ice chest beside the table in front. Everyone burst into laughter. After they enjoyed their rewards they were off to the playground. I then excused myself and borrowed the camera from Rya. It was time for me to play too.

I have not used the 24-105mm for some time now. On the other hand, this is Rya's favourite glass. With this weather l thought of putting the dials to f16 1/125 24mm. I was all over Sunny f16-ing the place. And when it was time for the adults to play a ball game I was there to capture some moments. All in all 252 frames were created. A third of it, mine. The rest are Rya's. 25 (20 from me and 5 from Rya) made it to the slideshow.

Another highlight was Ken conquering his fear sliding alone with the skateboard and swaying alone the mini-zipline. Justin was his best buddy as at first it was the two of them sliding with the skateboard. Also a huge thanks to JR for bringing the skateboard. Kaye was playing most of the time with her "twin sister" Jada. I can't wait to see what these two will do in future gatherings. Thanks to Patricia who played with the little girls too.

As we all said our thank yous to Asis & Shela, Ken was quick to say his thank you to Josh and even said "I love you kuya Josh". We could tell he was so grateful that day. We were still at the door when he gave a "Pheeew! I'm so tired Papa and Mama. I go ligo and go to bed." And that was what both him and Kaye did. Exhausted with all the fun.
Labels: park story Sunny f16