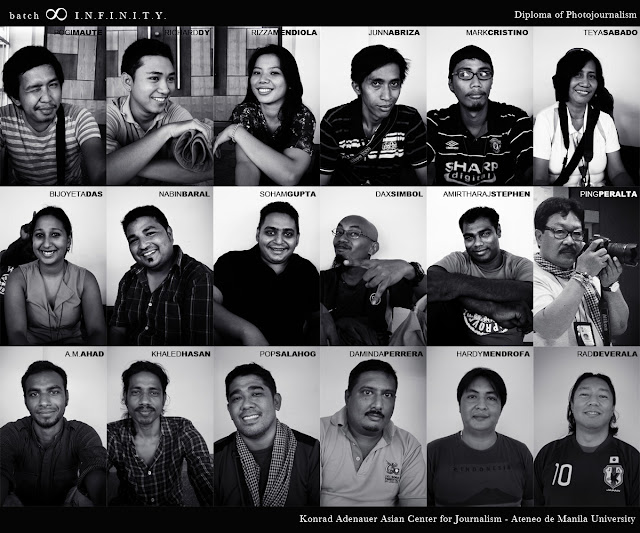 May 29th eighteen students meet for the first time to present their photo stories on-campus at the Ateneo de Manila University.

Day 1: They were divided into 3 groups to interview photo editors from online media outlets. One group went to the Senate because the photo editor they interviewed was covering the impeachment of chief justice Renato Corona.

Day 2: They went just outside the campus to cover the ongoing road widening at Katipunan avenue. The goal was to submit 4 photographs that are meant for the international audience and wire agencies. Two of the students who are photo editors were given the task to choose among the submitted images.

Day 3: They presented their photo stories and finished late. A celebration followed at the Tia Maria's Cantina. It was the end of the Fundamentals of Photojournalism course.

Day 5: They started the day watching "Beyond Words: Photographers of War". Then went around Metro Manila with the goal of creating photos for 2 different assignments.

Day 6:  They presented their assignments. And viewed some excerpts of Dead Poets Society.  As the day was coming to an end, they all went to the school grounds and took some photos.

Seventeen students remained. From Nepal, India, Bangladesh, Sri Lanka, Indonesia, Philippines and Japan. They are the eighth batch in the Diploma in Photojournalism of the Konrad Adenauer Asian Center for Journalism.
Labels: DPJ photojournalism visual storytellers