A2 : History of Photojournalism


Today I will be sharing part 2 of 3 assignments and my answer in my History of Photojournalism course. Feel free to write your comments or ask any questions and let's continue in our study of photography.

Migrant Mother: Dorothea Lange
If you were in this situation how would you take this photograph & why? 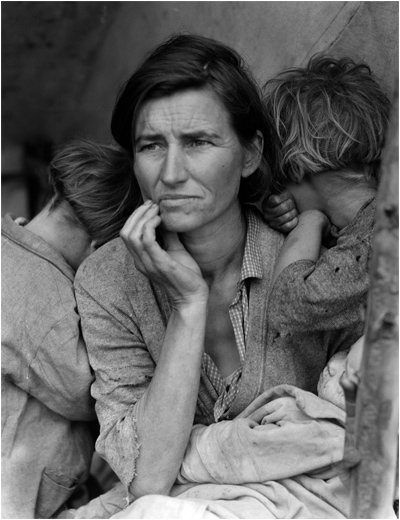 During the Great Depression the American government created The Farm Security Administration (FSA) in 1935 to alleviate the westward movement of sharecroppers, tenants, poor landowning farmers from central America suffering from dust storms and an extended drought. For the public and Congress to know what problems they were trying to solve, the FSA established its Information Division headed by Roy Stryker, a Columbia University economist. He then hired photographers and sent them across the United States to report and document the "visual encyclopedia of American life." It generated 80,000 remarkable photographs. One of these was an image of a mother and her three children. This was Dorothea Lange's Migrant Mother. I would not change a thing on how Dorothea Lange made this photograph. (Well, maybe sans the thumb and I may have asked Florence Owens Thompson her name and a bit of her history.) Lange captured the natural essence of a woman who has lost everything and yet steadfastly, vigilantly kept her dignity and family intact. Not only her years as a portrait photographer were readily seen in the organization of elements within the frame of the Migrant Mother but she was also able to truthfully depict that era of timeless, unhealable sorrow. Most of all, I believed she saw herself in what was buried deep inside her poignant subject and acted upon it. In Virgil's words, "Myself acquainted with misfortune, I learned to help the unfortunate."
Labels: DPJ182 history photojournalism