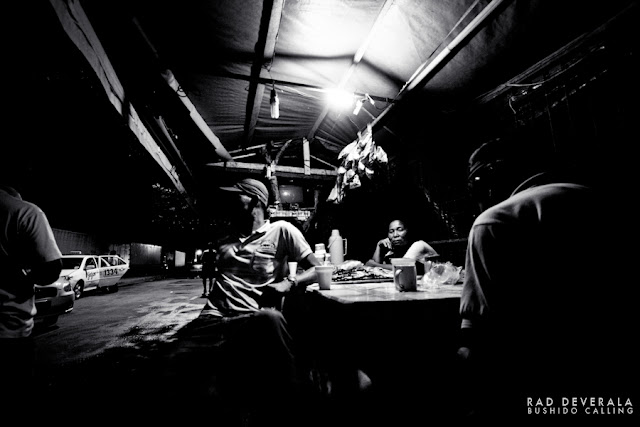 The following set of shots were taken 10 days ago when I was stranded at Davao city's International Airport. Cebu Pacific vehemently denied me to board the last plane because I arrived 30 minutes before the plane took off and I have not checked-in yet. I was hoping they would cut some slack to a guy who travelled almost 5 gruesome hours just to catch his ride. But the answer was no. Be it known that I did not write this to solicit pity but rather an account of what I experienced. But I can not help but wonder… how many of us Cebu Pacific passengers cancelled or even missed important business meetings during delays on this airline's part? They do not pay us, right? I am aware that it would be pointed out to me that I should have been in the airport 2 hours before departure. In fact I only have myself to blame for not leaving Midsayap earlier. So as the Japanese would say "shoganai". There was nothing I could do further about the situation I was in. The delay is partly blamed on the van that I rode in. It was not keen on arriving in Davao "on time" but rather the driver's goal was just to arrive in Davao. So he kept on picking up passengers along the way. I already knew that I will be late when we were still at Toril at 8PM. 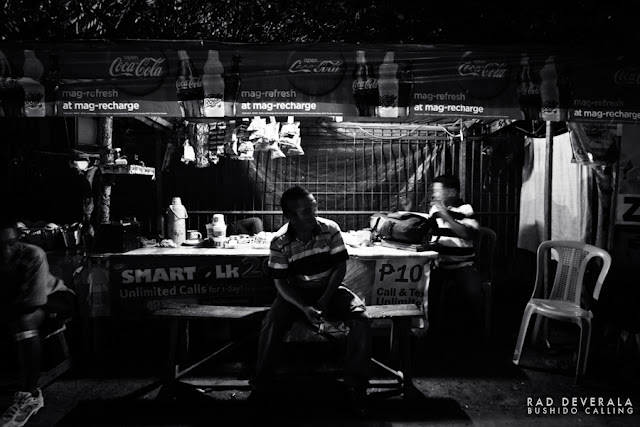 So there I was outside the airport after I paid and was rebooked for the following day's first plane out. I decided to stay and wait until 4AM to be the first person to check-in. The guard told me that no one was allowed to stay around and that I should stay where the taxis are waiting. At first it was a long line. Then the last plane arrived. One by one the taxis were picking passengers. Then there was none. 11PM. I was there. Alone. As much as I was tempted to take some night shots of the airport. I did not pull out my camera. Being detained for suspicious behavior was the last thing I wanted. And I did the right thing. A policeman came in a motorcycle and told me that I was not allowed inside the airport compound. Say what? Where on earth would I wait? Going back to the city and book a hotel for just 4 hours is not an option. He said that outside there are some passengers also waiting for the first plane. He was kind enough to escort me to the "waiting area". 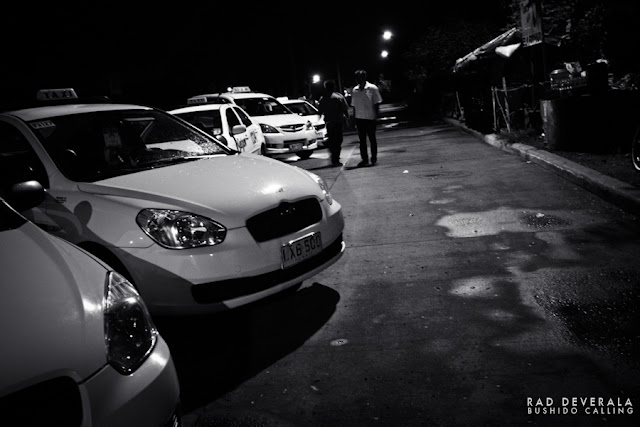 This is were the taxis are waiting. Outside the airport compound. The policeman explained to me that the reason why no one is allowed inside was that to avoid unnecessary problems toward civilians in the case of an unpleasant situation occurring that they would not be included in any investigation. Valid point. The airport was bombed in 2003 taking 21 lives and injuring hundreds. 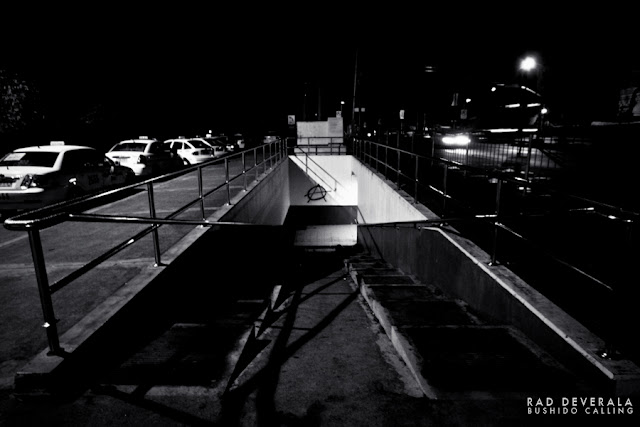 The sign at the underpass is ominous. My body was tired but a lingering fear kept me awake and adrenalized me for 6 hours. Although Davao is one of the safest cities in the Philippines, I have not seen the city in almost 10 years now. And it would be better to be alert than sorry. 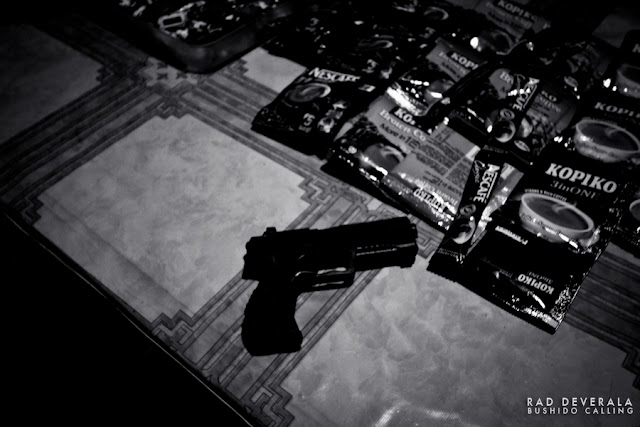 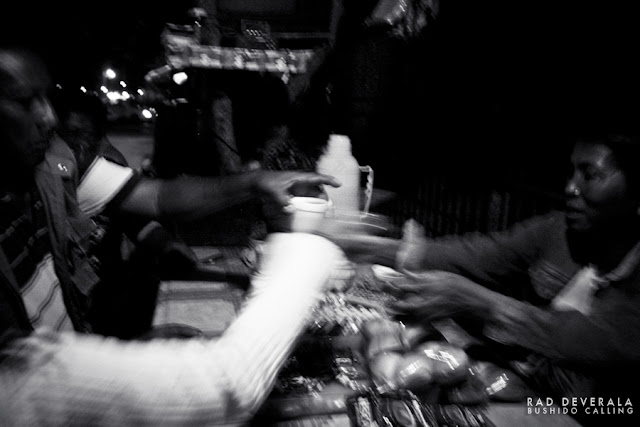 Some people, a few passengers and taxi drivers, battled their way with some killer coffee to stay awake. With hot coffee comes varied conversation topics. We talked about the massacre in Maguindanao up to the mayor's "pulp fiction". 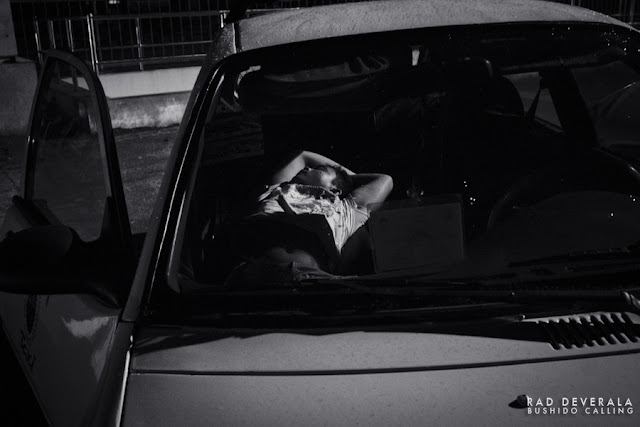 While some people comfortably took their nap. 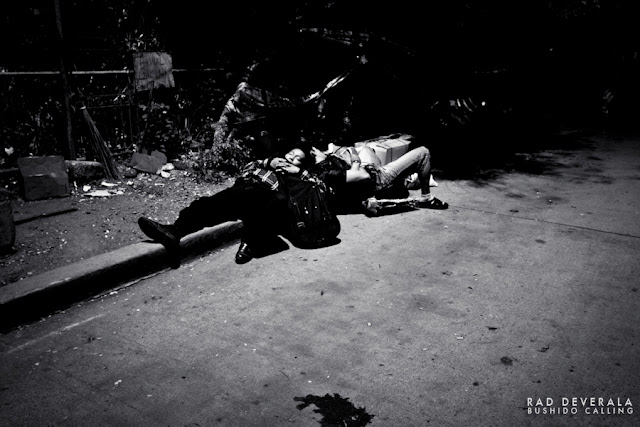 The not so lucky laid their heads on the streets. Which reminds me to echo out one of the passenger's complaint… what is the 200-peso terminal fee for? 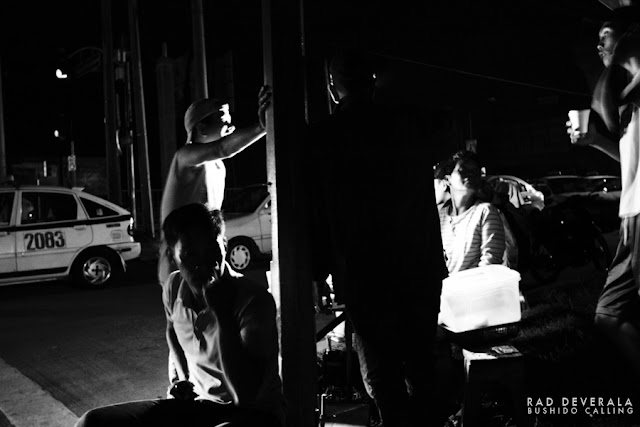 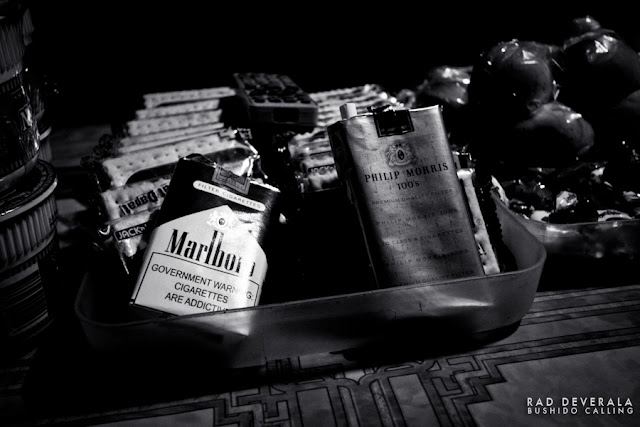 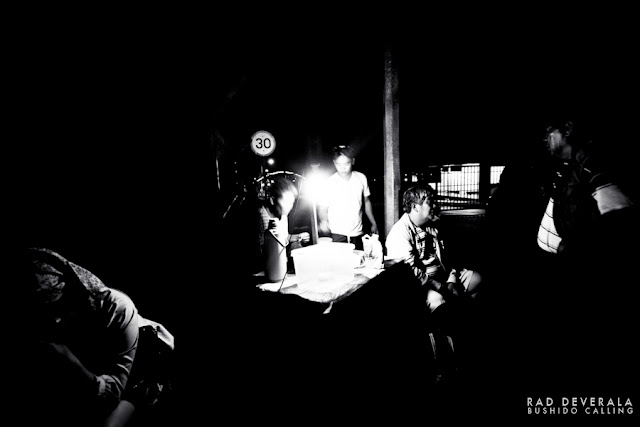 The conversations went on and on and on. It was a long night for everyone there. But the small economy was booming. Smokers may have had finished packs of their brands. Breakfast was even served in those stalls. And yes, the endearing balut is never out of the picture. 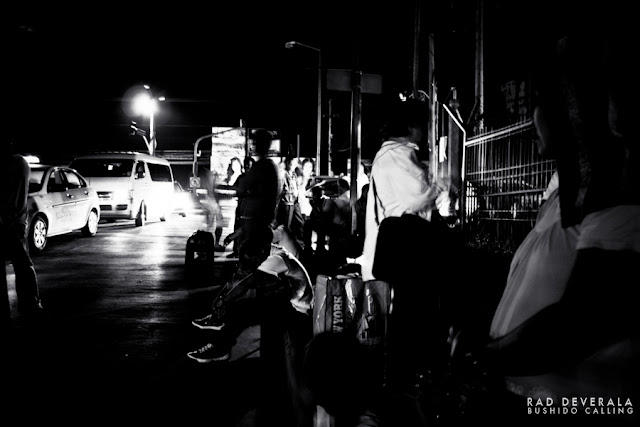 Around 3:30AM all sorts of vehicles were arriving. Restless passengers waiting for the gates to open were almost a hundred now. An old man manned the gates letting in employees. Braving those who questioned him and most of the time ignoring the usual complains. 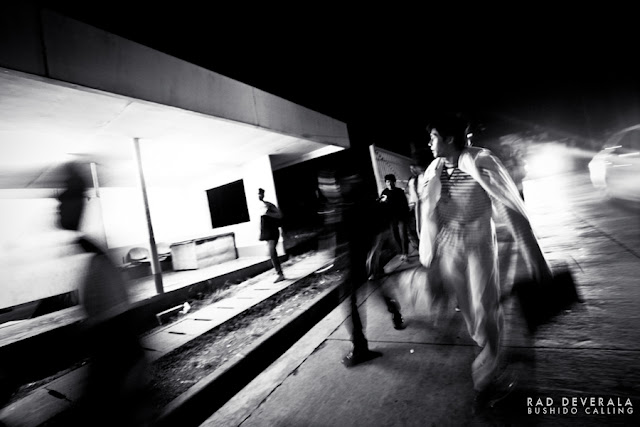 Finally, at 4:00AM the gates were opened and people rushed in like it was the exodus. Running. Chattering. Rolling bags roaring. The airport was alive again. 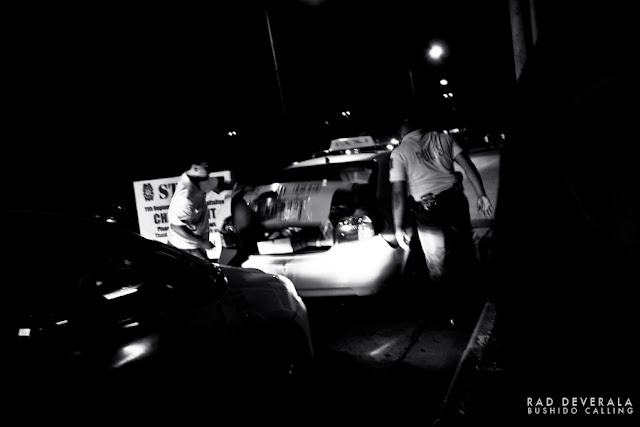 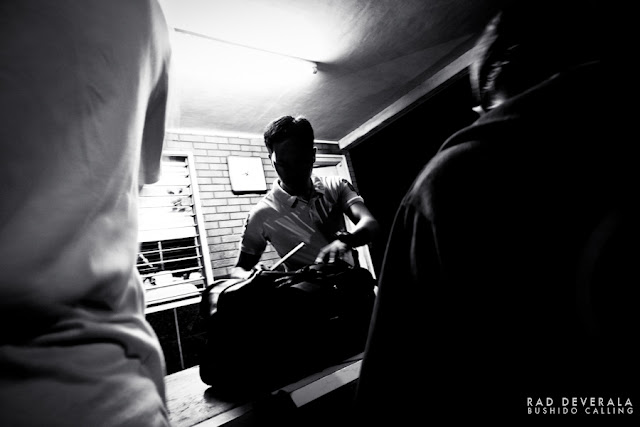 Everyone passed by inspection. Car hoods were opened. Bags were scrutinized. 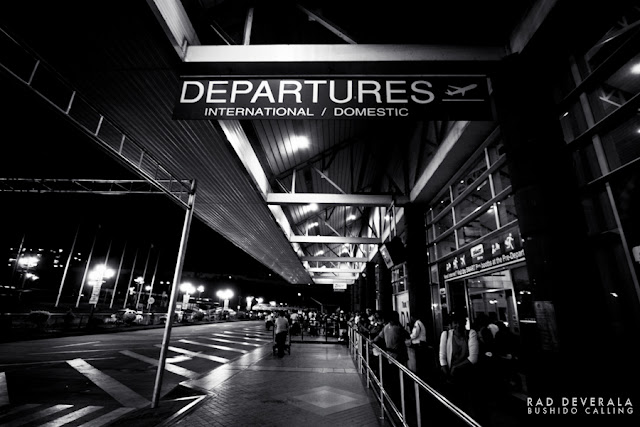 When I saw the Departures sign again. I said to myself, "I may not be the first one in line but I am definitely be going back to Manila safe today." 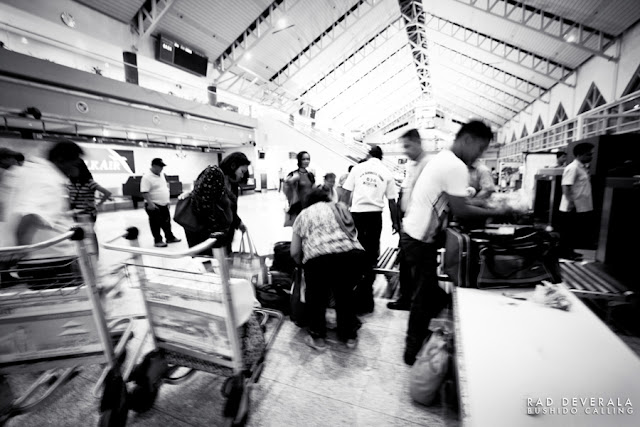 After passing my stuff over the scanners. I can not help but notice the extent of the anarchy. 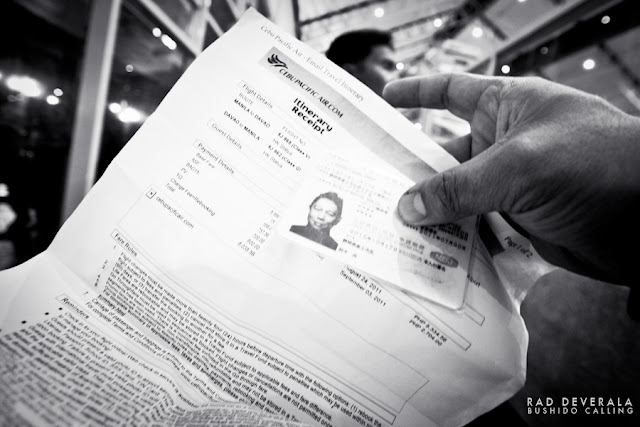 I have to let go of negative early morning vibes. So I reminded myself of how funny I looked on my ID. 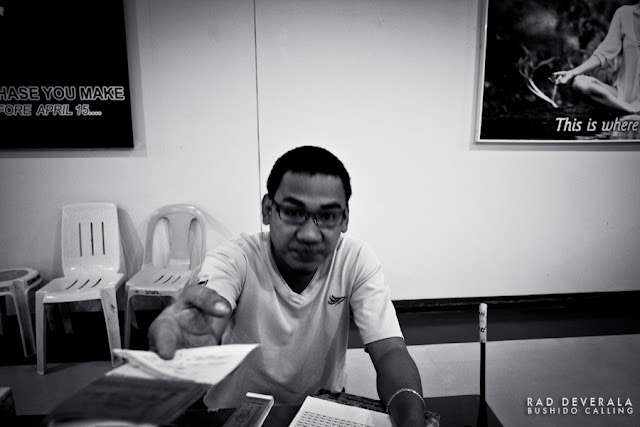 And laughed the more inside when I met the terminal fee personnel. 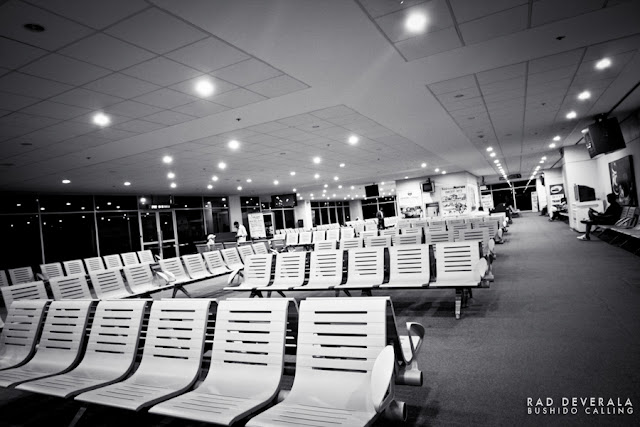 Finally, time for me to empty my mind for an hour and a half before boarding time.