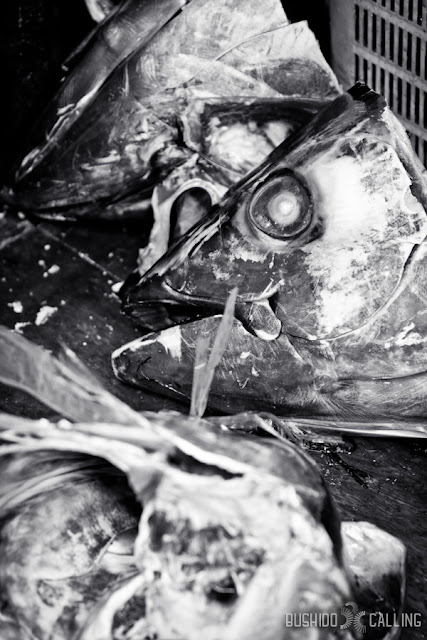 There we were braving the suddenly chilly summer morning on our way to Tsukiji fish market. A typhoon had just passed by Japan and probably caused the chill. Colder still was when we reached the market, with hopes to witness the tuna auction, we were told that they temporarily closed  it for public viewing. (Totomai posted in twitter yesterday that they will be re-opening it for public viewing next week.) 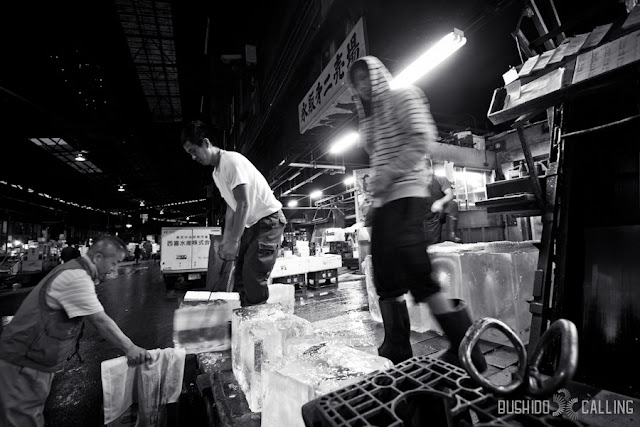 A part of us got dismayed when the guard told Kid that the main fish market will open at 9:00AM. We were aiming to take shots of those huge hanging tunas. I wanted to document the auction. So we re-planned and decided to stay until 11:00AM. We moved on and stayed across the street and watched as almost everyone around was moving. I was thinking to myself the contrast of the subjects of this photowalk. From young professionals to fisher folks. All equal. All movers of Japan's economy. 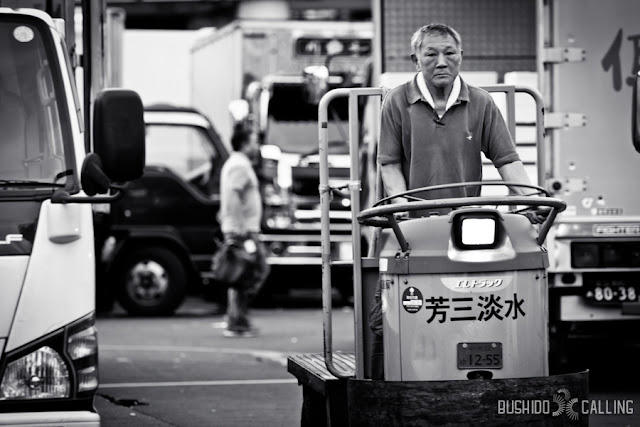 Outside, the motorized carts were racing here and there. We crossed a few streets with them zooming. Funny thing was we never saw them bumping with each other. The scene just reminded me of home, be it overloaded tricycles, jeepneys or kalesa (horse drawn carriage) packed and you just have to find your way across without the aid of traffic signals because they own the street.
Sleep was catching up on us. And with still an hour left until we were allowed to get inside. It was just right to sit down, rest, have breakfast and close our eyes while waiting for the time. 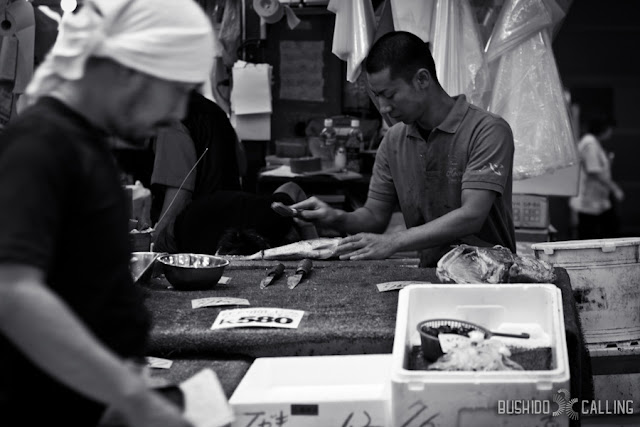 I could not contain the energy I felt when we got back. It was like from tired and sleepy to heightened senses. There were stories everywhere!  Stories within a story. As much as I wanted to keep on shooting and shooting, half of the time I was just standing there awestruck. The place is just so positive. Full of hardworking men and women. 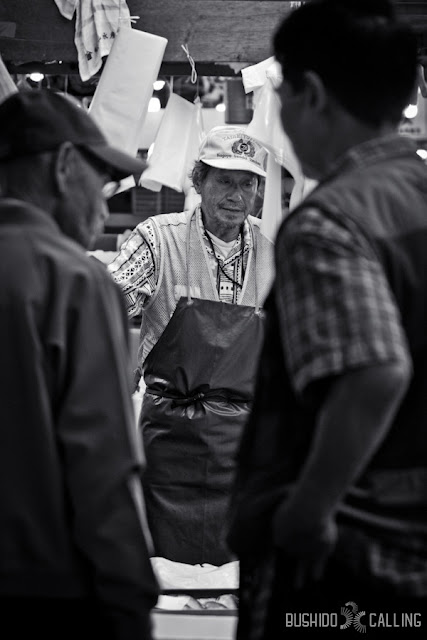 There were stalls with signs that say taking photographs is prohibited, but most of the people we encountered were polite to say "douzo" when we asked permission. We witnessed a lot of things that day. How the clients choose the right portions and how they sliced a tuna with a katana-like knife but with gentleness. It was perfection early in the morning. 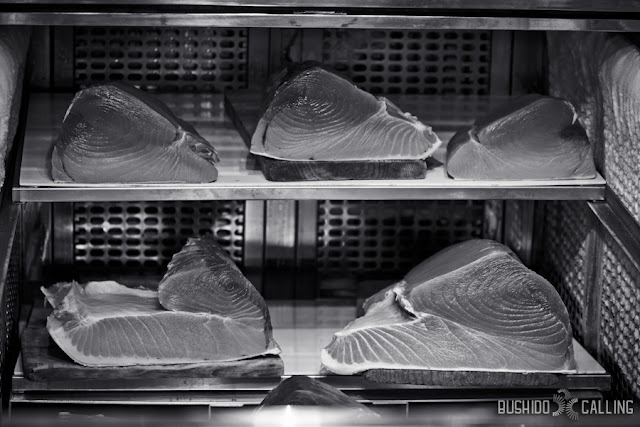 Tsukiji is not just all about fish as a maguro sushi can't just stand by itself. It always needs wasabi. Some stalls are of pickled vegetables, dried bonito flakes and other farm produce. There were also stalls selling souvenirs. Others sushi knives. We passed by a stall serving green tea and had our share. 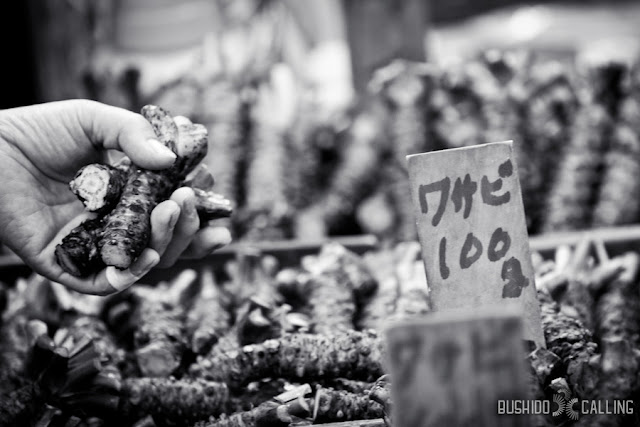 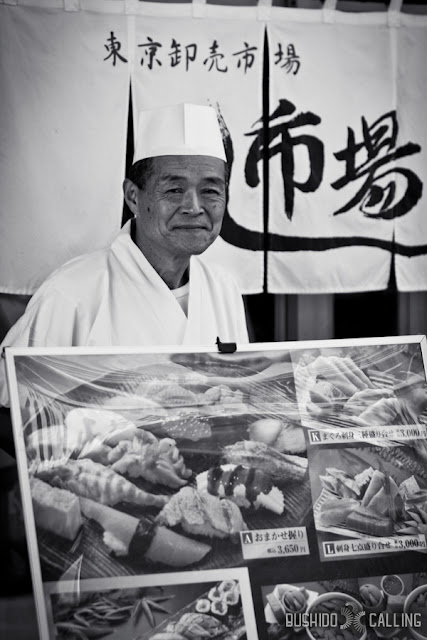 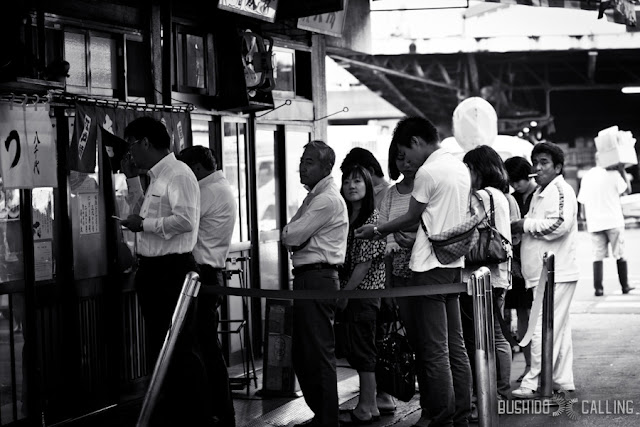 Kid and I took a few plates of maguro, salmon, tempura at a nearby kaiten sushi. Totomai was rushing to go having an appointment after two hours. 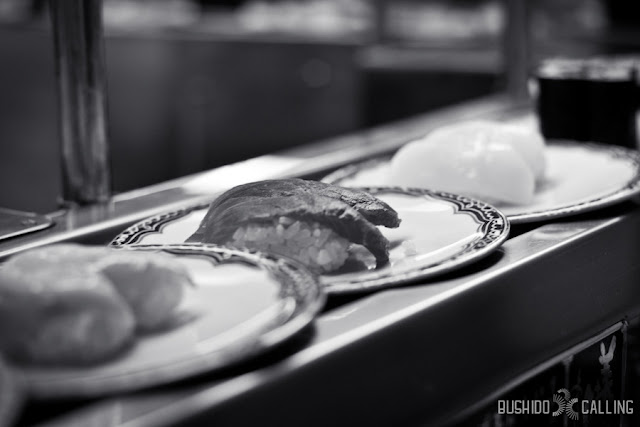 I will visit Tsukiji again, and again, as soon as I will be able to. I still want to witness the auction. I wanted to stay longer inside the market and if possible ask a few questions. And I want me and my wife to have lunch in one of those restaurants.